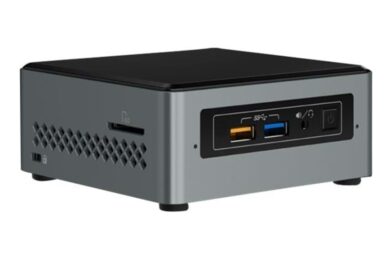 Actually, a lot of things are now running on this little NUC. Before showing you exactly what processes/services are running, please allow me to explain why I have this NUC in the first place.

Home Assistant and the NUC

In our previous house I was running Home Assistant on a Raspberry Pi. Home Assistant is a piece of software that can observe, control and automate nearly anything that can be part of a smart home. In my case, I had the following devices connected to it:

Linking all these devices together required something more robust than a Raspberry Pi, hence why in April 2019 I bought an Intel NUC NUC6CAYH. This little fellah has an Intel Cerion CPU, place for a maximum of 2x 4GB of DDR3L RAM, can house a 2.5″ hard drive and has a 1Gb ethernet port. I figured that this was a very good alternative for a Raspberry Pi, whilst also keeping my wallet in mind.

This NUC ran Home Assistant (or HA for short) very reliably, although the HA software itself needed quite some maintenance, up until we moved in December 2019. The NUC disappeared in a box, and at the new house I bought an Athom Homey to take over the task of HA in an attempt to limit the amount of maintenance work. This is why I had a NUC laying around when I decided to start setting up a Home Server in January 2020.

When I started on this project I knew nothing about file- or NAS servers, but I imagined that there would be open source software out there that could help me out. I had decided that I did not want to buy new hardware, as things could be tested on the NUC first to see if it would be good enough.

Two names that kept popping up were FreeNAS and Unraid. They both looked equally good candidates for me, so I picked the one that felt like it had the best chance of succeeding -> FreeNAS. Over the last couple of months I have been very happy with this choice. FreeNAS is running very stable and is in my opinion easy to use. The initial file server setup was a breeze, and in no-time I had a functioning NAS server which could be accessed through a PC with Windows Explorer (via a Samba share).

FreeNAS has a functionality which are called ‘Jails’. Jails are, very shortly explained, little isolated operating systems that use the same kernel as the hosts operating system. This means that they are more lightweight to run than a Virtual Machine as they dynamically share available RAM, CPU & HDD space between the host and other jails, but simultaneously are compartmentalized from the host. Processes run inside the jail can only access files inside the jail, and processes/files inside the jail are not aware of any file outside the jail. An additional (much better) introduction to jails can be found here. All in all, they are a perfect place to run additional programs/services without the risk of breaking my entire NAS system.

The current hardware today is, as I mentioned, running on an Intel NUC. This includes:

The HDD’s are set up in a mirrored configuration. That means that all data is copied on both drives, giving me an effective storage capacity of 2 TB whilst also protecting myself from a disk failure. This is also called a RAID 1 setup.

The current setup is running 3 jails, 1 Virtual Machine, a samba share and some additional smaller services inside FreeNAS:

So how do all these services work together? Well, that’s a different view:

Starting from the bottom, there are the NextCloud storage, this blog and the magic mirror which are accessible through the internet via the reverse proxy. There is also the Samba share which is accessible only on the local network for privacy reasons.

In the middle of the picture is the router which obviously has access to the internet. All DNS requests are however forwarded to PiHole. A DNS request is a request for a name server to translate the domain name of a website (for example jessendelft.org) to an address (for example 217.197.166.65), in order to connect to that address. PiHole blocks any requests to known advertisement addresses so that these requests never get resolved, which means they will not load. This way there is network-wide ad-blocking for all devices connected to it.

I have some plans of integrating Octoprint into the Reverse Proxy once my 3D printer is back up&running. I also want to move PiHole to a jail to free up some RAM and HDD space which are now reserved by the Virtual Machine.
If you have any more ideas on what I can do to improve my setup, please let me know!